The Lay of the Land

The Lay of the Land 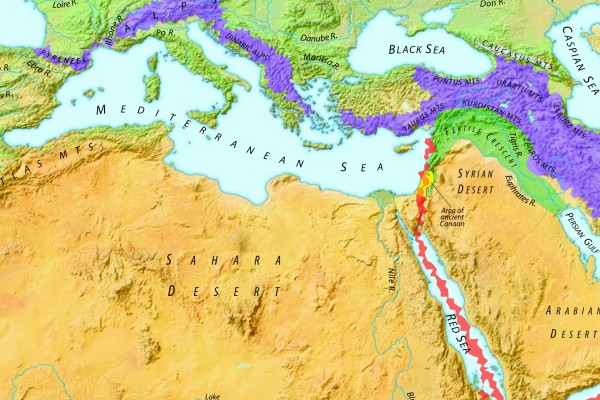 If the promises of God and the faithfulness of the biblical characters made the holy land holy, it was geography that made it the sort of stage for this drama that it became.

The Holy Land, also called Palestine, The Land of Israel, Judea, and Canaan, is part of what modern geographers call The Levant. This name stems from a French word meaning "rising." The Levant is so named because, from the Mediterranean, ships would see the sun's rising as originating from the Levant and because, from the perspective of the sea, the lands of the Levant rise dramatically on account of the mountain ranges that run parallel to the Mediterranean coast. These mountain ranges and their accompanying valleys have formed at the boundary between the African and the Asiatic tectonic plate. The geologic forces shaping the Levant have left a significant mark on the cultures, economies, and politics of its people.

Perhaps the most significant force shaping life in the Levant--indeed making it possible, especially in the highlands--is its subterranean geology. The area has an abundance of underground non-porous rock, which pushes ground water to the surface even at the highest elevations. These forces feed numerous springs and make groundwater easily accessible by wells, which are a familiar feature in many biblical stories.

How people lived off the land and how the biblical people found themselves at the veritable center of civilization was determined in large part by the tectonic forces that formed it long before the biblical characters occupied it. Running south-to-north from the Arabian Peninsula in the south to the Taurus and Kurdistan Mountains in the north is a geologic rift called the Dead Sea Transform.

The DST, also called the Jordan Rift Valley, has running through its heart the Jordan River, which flows from its headwaters in the northern Lebanon mountains southward to the Dead Sea. To the east of the valley are a range of mountains that constitute the Judean and Samaritan Highlands, which together are called the Central Highlands. To the west of the rift valley are the Gilead Plateau and the Moabite Highlands. Between the central highlands and the Mediterranean coast is an approximately 20-mile wide fertile coastal plain. To the East of the eastern range lies the Syrian, Eastern, and Arabian Deserts (really, they all merge into one big, barren expanse.) 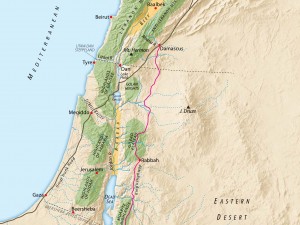 Cutting across these ranges and valleys in an east-west orientation are a series of four depressions that enable easy access to the sea and the central Jordan valley. The most important of these valleys for ancient and modern Israel is the Jezreel Valley. This valley has rich alluvial soils, making it ideal for farming. It also became a primary corridor for travel along the Great Trunk Road, also called the Via Maris or Way of the Sea, which has been a primary trade and migration thoroughfare between Syria and the east and Egypt and the west. Thus, Israel, and Galilee in particular, stood at the crossroads of the ancient world.

Another feature profoundly affecting the Levant is its subterranean geology, particularly in the north. In the mountains of modern-day Lebanon and Western Syria there is an abundance of non-porous rock. These underground formations push ground water to the surface even at the highest elevations, which feeds numerous springs and makes groundwater easily accessible by wells, whack are a familiar feature in many biblical stories.